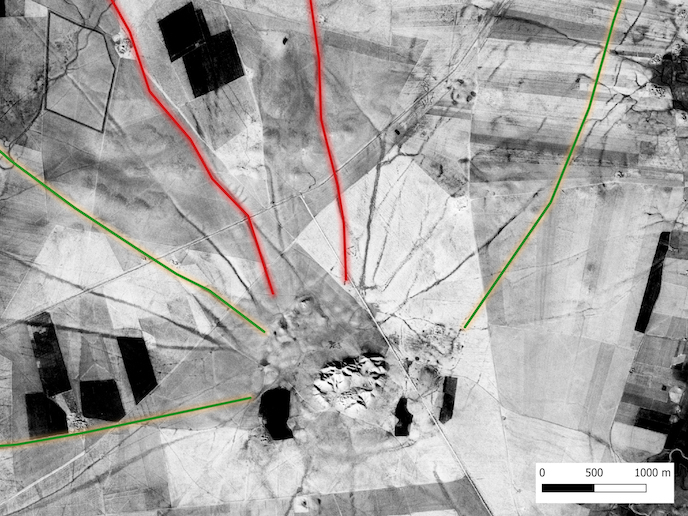 GeoMOP  (https://geomop.eu/) is an innovative methodological approach integrated between earth observation methods and archaeological prediction models aimed at simulating the human-environment interaction to observe the changes that have taken place in the landscape.

GeoMOP is a concrete example of the international research of the Institute of Heritage Science (ISPC) of the CNR conducted within the broader European framework of E-RIHS.

Throughout human history, roads have been a means of cultural, social and economic interaction. GeoMOP traced movement across the Upper Mesopotamia during the Bronze Age, by using satellite imagery and modelling to observe landscape changes.

Ancient roads reflect the social, economic, political and religious relations of past societies. The constant movement of people and animals over hundreds of years along these dry Upper Mesopotamian paths compacted the soil relative to the land around it. This movement ‘hollows’ out the road, making it much lower than the land on either side.

After recognising modern vegetation as proxy indicators of ancient roads, GeoMOP used remote sensing analysis and agent-based modelling, to explore the formation and use of these roads

GeoMOP relied on high-resolution images taken by the CORONA spy satellite during the 1960s and early 1970s, before more recent land changes, to observe these patterns of movement. The team also used satellite data, including optical multispectral and synthetic aperture radar imagery, to detect proxy indicators linked to changes in vegetation growth and moisture content. Again, this approach helped the team identify areas more compacted than others, indicating more use and so suggesting the presence of ancient roads. Finally, GeoMOP also built some agent-based models (ABM) to explore the formation of these roads. By running preprogrammed virtual ‘agents’, representing sheep and cows for example, on dedicated paths, they observed how the roads were likely to have been formed over time.

The ISPC facility in Potenza participates in the MOLAB platform which offers transnational access to advanced mobile instrumentation which performs non-invasive in situ and ex-situ analyzes on objects of art, archaeological sites and historical monuments. The MOLAB platform, coordinated by Costanza Miliani, director of ISPC, together with two other platforms ARCHLAB and FIXLAB contributes, as part of the European project IPERION HS (Integrated Platform for the European Research Infrastructure on Heritage Science) to the establishment of E-RIHS .