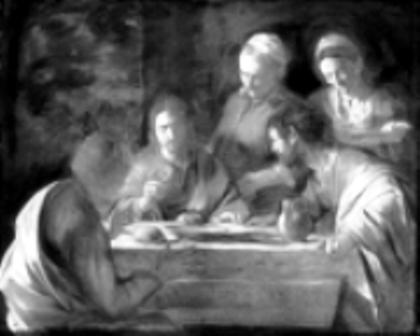 RAI, the Italian national TV channel dedicates an extensive reportage to new technologies applied to cultural heritage at CNR, the Italian National Research Council.
Particular attention is given to the research carried out by the CNR Institute of Nanotechnology. Along with the Physics Department of the Sapienza University of Rome, CNR Nanotech is carrying out the ambitious project of bringing to light the content of the 1800 papyrus discovered in the Villa of the papyruses in Herculaneum. The Institute has developed an extremely advanced X-ray tomography technique for the study of neurodegenerative diseases. Applied to cultural heritage, this technique makes it possible to distinguish writing from the papyrus sheet. The development of mathematical approaches has also allowed the virtual selection of larger portions of the papyrus and their virtual unrolling. The collaboration with the CNR-ILIESI Institute helped not only identify several lines of text of the papyruses, but also translate them. The historical-philosophical relevance is enormous: at the moment it is thought that the papyruses belong to the philosophical production of the Greek philosopher Filodemo di Gadara. The challenge for the future is to speed up the process to unveil the contents of a large number of these papyruses.

Particular attention is also paid to the CNR-INO, whose sophisticated ultra-high resolution reflectographic scanning techniques have shed new light on numerous works of art, above all the Virgin of rocks by Leonardo, currently at the National Gallery in London and the Supper in Emmaus by Caravaggio in the Pinacoteca di Brera. In both cases, investigations gave an invaluable contribution to the understanding of styles, techniques and pentimenti. The Virgin had initially been thought kneeling with her face in profile and her left hand crossed over her chest, but finally, Leonardo decided to completely modify his original project. Even more surprising is the discovery made in the Supper in Emmaus where Caravaggio initially places a window with a landscape, but then rethinks it and covers it with a thick coat of black darkness, thus introducing into the scene the dramatic violence of light and shadow that is the stylistic and unmistakable trait of his work.

Overview also for the MOLAB, the CNR mobile laboratory that has traveled all over Europe in order to perform indispensable diagnostics of the health of masterpieces such as Van Gogh’s Sunflowers, Munch’s scream, Jackson Pollock’s Alchemy.

Finally, the virtual reality by CNR-IBAM, ISTI and Roma Montelibretti with the spectacular reconstructions in a very high audio and video resolution  of the Baths of Diocletian, the landscape of the Tiber Valley with its villages as they must have appeared at the dawn of Roman Civilization, the Temple of Augustus in the Roman Forum, and the Ara Pacis

Watch the full video (in Italian)