ECCPruB: Examination of Colour Changes due to the Fading of Prussian Blue in Danish Golden Age Paintings (1800-1850) 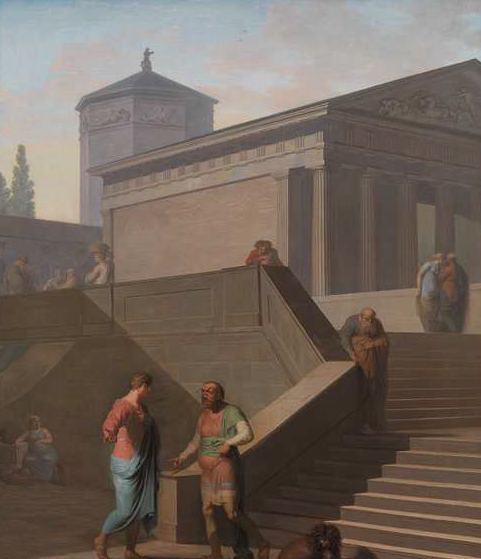 In December 2015 a team of researchers from the MOLAB team carried out non-invasive in situ
analyses on a selection of paintings from the Danish Golden Age belonging to SMK and DHS. The
investigated paintings are listed below:
– KMS588, Pamphilius and his sevantDavus. From Terence´s Andria (1802) by N.A. Abildgaard, 169.4 x 141 cm, oil on canvas;
– KMS359, A View of Lake Sortedam from Dosseringen Looking towards the Suburb Nørrebro outside
Copenhagen (1838) by C. Købke, 63.6 x 82.6 cm , oil on canvas;
– KMS967, Frederiksborg Castle by Moonlight (1817) by J.C. Dahl, 67.4 x 91.7 cm, oil on canvas;
– KMS724, Princes Wilhelmine, Frederik VI’s daughter (1819) byC.W. Eckersberg, 46.5 x 37 cm, oil on canvas;
– KMS1286,View of the Cliffs of Møn and a Corvette (1833) by C.W. Eckersberg, 24.5 x 34.5 cm, oil on zinc;
– DHS125, A Corvette ”Galathea” having spoken an English Pilot in a Gale, (1839) by C.W. Eckersberg, 47.8 x 63.6 cm, oil on canvas;
– DHS104,An Arbour in the park of Sanderumgård (1807) by by C.W. Eckersberg, 60 x 81.6 cm, oil on canvas.
The request for MOLAB was to investigate the color change between exposed and non-exposed areas in some blues, greens, and purples by means of X-ray fluorescence (XRF), Fourier-transformed infrared spectroscopy (FTIR), Raman spectroscopy, UV-vis-NIR reflectance spectroscopy and digital microscopy. The color change was assumed to be related to the fading of Prussian blue, the most commonly used blue pigment during this period. Prior to the MOLAB installation, the paintings had been unframed and, by removal of the varnish, cleaning windows in some of the paintings had been created to avoid misleading analysis results due to the presence of the finishing layer. The absence of the frame allowed comparison of non-exposed, unfaded with exposed, faded areas of the paint surface. The in situ analyses were performed on areas chosen by the SMK conservators and scientists in agreement with the MOLAB researchers. 565 individual measurements were collected using XRF spectroscopy (205), infrared spectroscopy in reflection mode (156), UV-vis-NIR spectroscopy (167) and digital microscopy (37). XRF showed that the presence of iron is very low and that the same amount of Fe was present in the unfaded and faded areas. XRF measurements revealed also that the so-called zinc plate of Eckersberg painting (KMS1286), was in fact not zinc. Results pointed instead to the painting support being an iron plate covered by tin. FTIR results showed the profile of the CN group band on the Prussian blue molecule as something to the pursuit. Extra bands and changes in the shape/position of the CN band could be related to the degradation process or to the type of Prussian blue pigment used. It is relevant to report that the CN signal was still detected in all the exposed, faded areas, even if the color had turned pale blue or almost white compared to the original tone.
UV-vis-NIR results confirmed the presence in all cases of Prussian blue and highlighted some
differences between the faded and unfaded areas.
The data collected during the four days of the MOLAB campaign will be analyzed and discussed in the
near future in collaboration with the MOLAB researchers.
In order to rationalize the data and understand the degradation phenomenon of the pigment, specifically conceived mock-ups will be prepared mixing Prussian blue and variable amounts of white pigments in oil, aged under different conditions and investigated both at SMK and at the CNR/University of Perugia.

← AshNMR – Effects of ageing on the wood and varnish of violins and violas EXAManet: Combined Scanning Multispectral Infrared Reflectography, VIS-NIR Hyperspectral Imaging and Macro-X-Ray Fluorescence: an innovative approach to the study of materials and technique of five paintings by Édouard Manet at the Courtauld Gallery →
Keywords