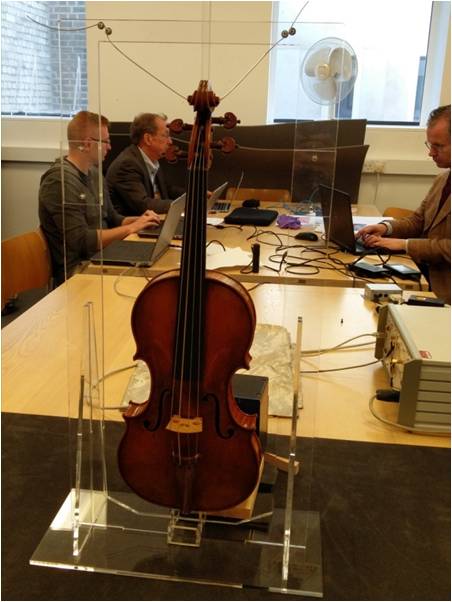 The Ashmolean museum Oxford currently presents violins and other instruments made by the famous instrument maker Stradivari and his disciples. Previous work suggested that a correlation of instrument age and wood density measured by NMR existed. MOLAB5 was called to perform contactless studies on wood density, composition and structure with depth resolution.
To visualize the ways and degrees of treatment, NMR depth profiles were acquired with a PM5 NMR-MOUSE ® and analyzed by employing a weighting function. Contrary to the common approach of creating a contrast parameter that divides the sum of the first echoes by the sum of all following echoes, a new approach based on Inverse Laplace analysis is used. To this matter, the NMR signal decays at each depth were transformed by ILT into the components that compose the overall signal. In all positions, we observe one peak at a very low T2 of roughly 0.1 ms. This peak is commonly attributed to hydrogen bound in the cellulose and shows the highest amplitude of all observed peaks. In all positions and on all instruments a second peak at T2 = 1 ms is present and is assigned free water in accordance with previous results.
A striking effect became visible when comparing measurements at different locations on the violin back plate. We observe a distinct difference in the molecular composition of the wood at these locations. Bound water is not visible while it is clearly present in the same piece of wood just a short distance away from the center. However, when only two peaks are visible, the free water component is found at slightly lower T2, indicating that a small averaging effect may be present. We hypothesize that this effect can only be attributed to the manufacturing process of the violins, where wood slabs of maple were used to carve out different parts of the instrument. As one approaches the center of the slab, the wood becomes older due to the tree’s structure resulting from its growth.
Effectively, the distribution of T2 times at each depth can be employed to gain additional contrast in a depth profile. This is most often realized through the weighting which assigns a constructed value to each depth increment by dividing the first few echoes by all the rest. This method is intrinsically arbitrary as it depends on the selection of both sums in the quotient. A cleaner method is presented where Inverse Laplace Transform data are analyzed at each depth. Like the weighting function, the method is very sensitive to changes in the ratio of lower and higher T2 times, which makes it possible to detect lower relaxation time components even though their amplitude may be small which makes it a formidable tool to observe thin layers such as varnish or just to observe effects of brittle surfaces. In the case of the Stradivari violins, it seems to be possible to identify instruments that have been treated and it is possible to observe to which surfaces conservation methods have been applied. Differences in the amplitudes of fast relaxing components were observed on one or two surfaces of 8 out of the 10 violins. The discussion of these results is ongoing.
Measurements on this set of violins seem to contradict the hypothesis that this effect can be used to date the instruments. A correlation of the fit amplitude, which corresponds to the hydrogen density in the material, and the age of the violin cannot be confirmed. Furthermore, neither plots of the sum of 64 or 16 echoes of the CPMG decay against the age can provide a measure to successfully link the age of the violin with the relaxation weighted hydrogen density of the wood. This may be due to the vastly different history of each instrument, as some of them seem to have been more regularly treated and some of them are played even to this day. Hence, external influences such as light, humidity, and temperature may have a higher effect than just age.

ECCPruB: Examination of Colour Changes due to the Fading of Prussian Blue in Danish Golden Age Paintings (1800-1850) →
Keywords