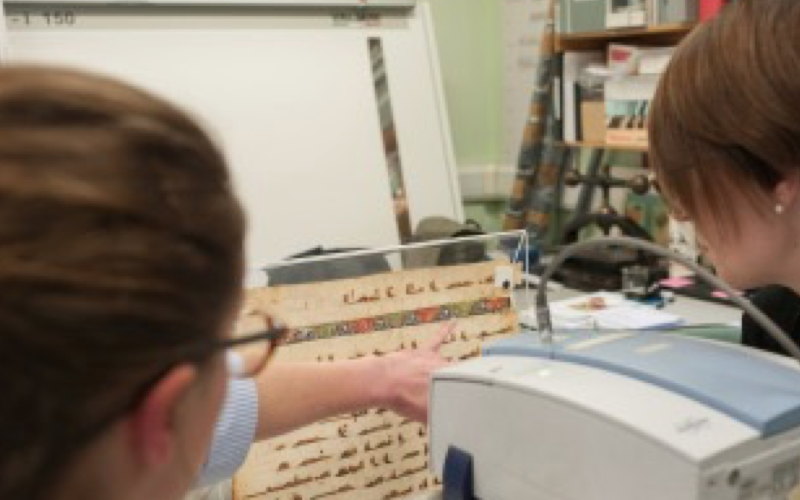 The pressing need to conserve a large early Qur’an manuscript on parchment (CBL Is 1404) has served as the catalyst for significant investigation of both early Islamic manuscript materials, and the most suitable contemporary conservation techniques for this object at the Chester Beatty in Dublin, Ireland.

Comprised of 201 folios and measuring around 47 x 38 cm, current scholarship suggests that this large Qur’an manuscript is Umayyad; that is, it was made in the first decades of the 8th century before 750 AD under the patronage of the Umayyad Dynasty.The manuscript has suffered extensive water damage and subsequent corrosion of the iron containing ink it was written with. It has in turn been subject to numerous layers of previous repairs, many of which are now failing, ineffective, and incurring damage to the manuscript. The folios are not bound, and hold very little evidence of the previous binding. Removal of the old repairs, and stabilisation of the ink-damaged parchment is currently underway.

Identifying the production place of such early Islamic manuscripts is notoriously difficult; no dated examples or colophons are known before the 10th century, and the corpus of manuscript comparanda is sufficiently small to make dating and locating through palaeographical comparison extremely difficult. As such, the sheer volume of material surviving in this single manuscript provides a wealth of material information through which our understanding of early Islamic manuscript production can be increased.  The EQuIP-MOLAB initiative has been essential in shedding light on this period of manuscript production.

Analytical examination of the CBL MS Is 1404was undertaken in collaboration with MOLAB between 12th -16th March 2018. A team of seven scientists from the Universities of Florence (INO) and Perugia (ISTM) visited the Chester Beatty to carry out non-invasive analysis on the manuscript’s decorative bands and parchment. 34 folios were examined in total, and the initial findings are currently under investigation.

The folios were examined using a range of complementary analytical techniques within three dedicated spaces at the Chester Beatty. The analysis was supervised by members of the EQuIP team, and facilitated using a variety of flexible conservation mounting techniques to enable full access to the manuscript folios. As the new XRF mapping technique was the most time consuming technique in use,it was used to establish a timetable for the rotation of the folios between MOLAB teams and analytical techniques. The techniques in use were:

The questions for the MOLAB-EQuIP initiative were formulated in advance of the week-long visit, in light of current research in the field of both Islamic manuscript studies and parchment materiality. Key objectives for the week were to identify the materials used in the illumination of an 8th century Qur’an manuscript, and to characterise the parchment of this manuscript, in particular to identify any parchment surface preparation materials and techniques in evidence. Both objectives were met through the collaboration of the MOLAB-EQuIP teams, and further research is in progress.

The opportunity to work with the expert MOLAB team has stimulated exchange and research on an important early Qur’an manuscript at the Chester Beatty. To date this is the first in-depth study of an early 8th century Umayyad manuscript, and it provides an invaluable starting point for further research in this area. Initial results of the MOLAB-EQuIP analysis have already been shared by the Group Leader at the 17th Seminar on the Care and Conservation of Manuscripts in Copenhagen (11th -13th April 2018). It is hoped that as the results and spectra are further reviewed and understood, they will form the basis of a detailed scientific publication in collaboration with the MOLAB team.

The EQuIP team is extremely grateful to the generous support of IPERION CH and MOLAB, and hopes that the outcomes of this highly productive project will contribute both to the understanding of CBL Is 1404 at the Chester Beatty, and to the field of Islamic manuscript conservation more widely.

The image in the report is subject to copyright: © The Trustees of the Chester Beatty Library, Dublin.

← Recovering Giotto at the Basilica of Saint Anthony, Padua Analysis of the composition of non-ferrous metals, used for decorations in Early Middle ages in Bulgaria. →