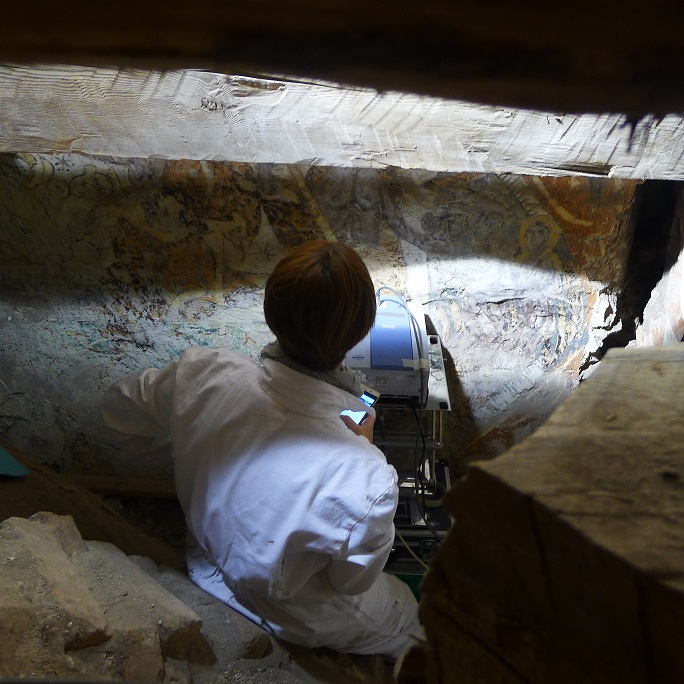 In September 2016 the MOLAB team carried out non-invasive in-situ analyses on medieval mural paintings, dated to the beginning of XIV century, located above the church vault. These murals had been hidden and forgotten about for almost 600 years when they were rediscovered in connection with roof reconstructions in early 1900. These paintings are still largely hidden and remain unexplored by both the public as well as for the research community. Consequently, they do not have a complex conservation history as the paint layers have never been conserved or retouched. The aim of this project was to investigate the paint layers and their composition in order to get a picture of the employed wall painting techniques as well as the materials (pigments, fillers, additives) used and their alteration products. The requested MOLAB techniques were X-ray fluorescence (XRF), total reflectance mid-FTIR (mid-FTIR), Raman spectroscopy, UV-vis-NIR reflectance spectroscopy and video microscopy. The location of the murals within the church vault provided a much-reduced space and where possible instrument positioning in front of the painted surface permitted for effective analyses. Nevertheless, all the main representative colors have been characterized by 275 individual measurements without any sampling needed. The obtained results highlight a ground layer of calcium carbonate. The presence of signals ascribable to a likely proteinaceous material is present in some of the investigated points while in other parts the presence of biological material only is evidenced. Calcium oxalates as a degradation product have also been found in several parts of the surface. Concerning the different colors, the grey areas are partially characterized by high amount of calcium and lead where the grey hue could be possibly attributed to although not confirmed as alteration products of lead white. Green zones are characterized by copper-based pigment (tentatively identified as verdigris-type from UV-Vis analysis). The elemental composition permits the presence of zinc to be linearly correlated with copper; chlorine is also present.
Concerning the yellow/brown areas, also in this case, three different compositions can be assumable:
Type 1, brownish red with a high iron content, variable amounts of lead and arsenic are negligible or absent. In this case, the hue could be due to an iron-based pigment, possibly hematite, as suggested by the presence of an inflection point at 580-590 nm, an absorption band at about 860 nm and Raman signals from silicate which can be due to an iron based pigment such as a natural earth. The high amount lead could suggest the presence of minium connected with the presence in some areas of a strong absorption in the NIR region possibly due to a black alteration product.
Type 2, intermediate tone (brownish yellow/orange) with high iron content (but generally lower than in Type 1), variable amounts of lead and negligible/absent arsenic. Iron-based pigment, possibly goethite, is suggested by the presence of a shoulder at about 450 nm, an inflection point at 535-545 nm and of a weak absorption band at about 910 nm. Furthermore, also in this case, Raman technique detected signals from silicate.
Type 3, light yellow with iron content again lower than in Type 1, variable amounts of arsenic and lead negligible or absent. Raman has detected signals from silicate which can be due to an iron based pigment such as natural earth while no arsenic compound has been identified.
The data collected during the four days of the MOLAB campaign will be analyzed and discussed in the near future in collaboration with the MOLAB researchers.
In order to clarify the suggested presence of lead based pigments (both red and white) some aimed samples could be taken and analyzed in cross-section. In this way, it would be possible to verify if, under the black degradation products highlighted by the surface measurements, original pigment residuals are still present. On these samples, further investigations by means of micro-FTIR and GC-MS could be also useful in order to disclose the real origin of the proteinaceous material detected in some of the point.
The final result will be interpreted with the initial investigation results (UV photographing) and new art historical aspects recent reveal during next year and published in an international context.

← Analysis and Research Methods In Management of Photographic Materials: Gelatin Glass Plate Collections Yellowish Gypsum Efflorescences on Wall Paintings from the 14th Century in the Cathedral of Schleswig in Northern Germany →
Keywords