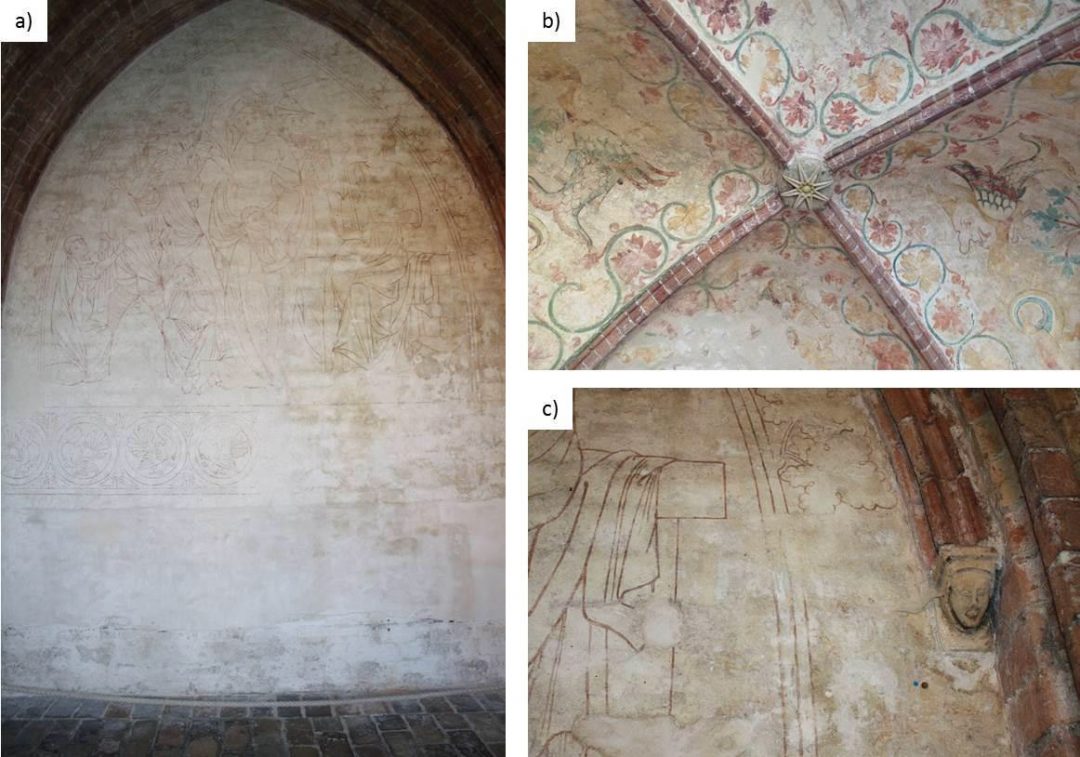 This extract of the found articles demonstrates that in all cases in which yellowish patinas or spots are described they are attributed to organic substances or to residues of ageing of these substances which both can have such yellowish or also brownish appearance. Their sources can be found in substances used in old restoration interventions or in impurities of the mortar. In the latter case, water or also interventions with wet compresses especially with alkaline solutions can mobilize them to the surface. Furthermore in talks with the experts from the OPD the aspect of organic residues on the surface instead of gypsum efflorescence responsible for a yellow discolouration was outlined just after a short explanation of the situation found in Schleswig. A special advantage during the visit of OPD was the possibility to analyze some samples from the wall paintings in Schleswig with experts, Carlo Galliano Lalli and Federica Innocenti, from the Opificio. Investigated samples were taken from the intonaco in unpainted areas in two different bays of the cloister, one of them showing no evident encrustation and two with an extreme discoloring on the outermost layer. With the knowledge and expertise of the experts results of performed stratigraphic analysis (with optical microscopy) and investigations with scanning electron microscopy with energy disperse X-ray spectroscopy could be discussed directly and invaluable results and conclusions could be drawn. It was confirmed that also in the case of yellowish crusts on the wall paintings in the Schwahl organic substances are present. Gypsum was not detected in the yellowish areas on the surface. Of course, a superficial enrichment of gypsum was detectable but no sulfur or calcium was present in areas of the described crusts. Barium could be identified in parts of these areas but barium sulphate (originate from gypsum transformations performed in the years between 2010 and 2013) is not the only component. This became evident in element mappings. Besides, sections that were identified as the outermost layer and as the described crusts with optical microscopy were only vaguely recognizable in SEM images. A reason for that is the presence of mainly oxygen and carbon in organic materials. These rather light elements lead to darker areas in the images due to a weaker backscatter of electrons. Even though the initial suspicion formulated in the application form has been disproved and gypsum is not the origin of the problem, an explanation was found during the visit at the OPD, thereby opening the way of finding solutions to cure the object and to preserve this piece of cultural heritage. Now, these findings must be discussed with the participating restorers in Germany to make decisions concerning further procedures. The ARCHLAB program enabled a very interesting stay at the OPD which helped me expand my horizon to the field of conservation practice and conservation techniques. Next to results which are important for the wall paintings in Schleswig and also for my Ph.D. thesis I was able to get a lot of interesting facts by reading literature including the fields of art history, painting techniques, restoration, and conservation.