Hidden Armadas in the Armada Portrait of Elizabeth I 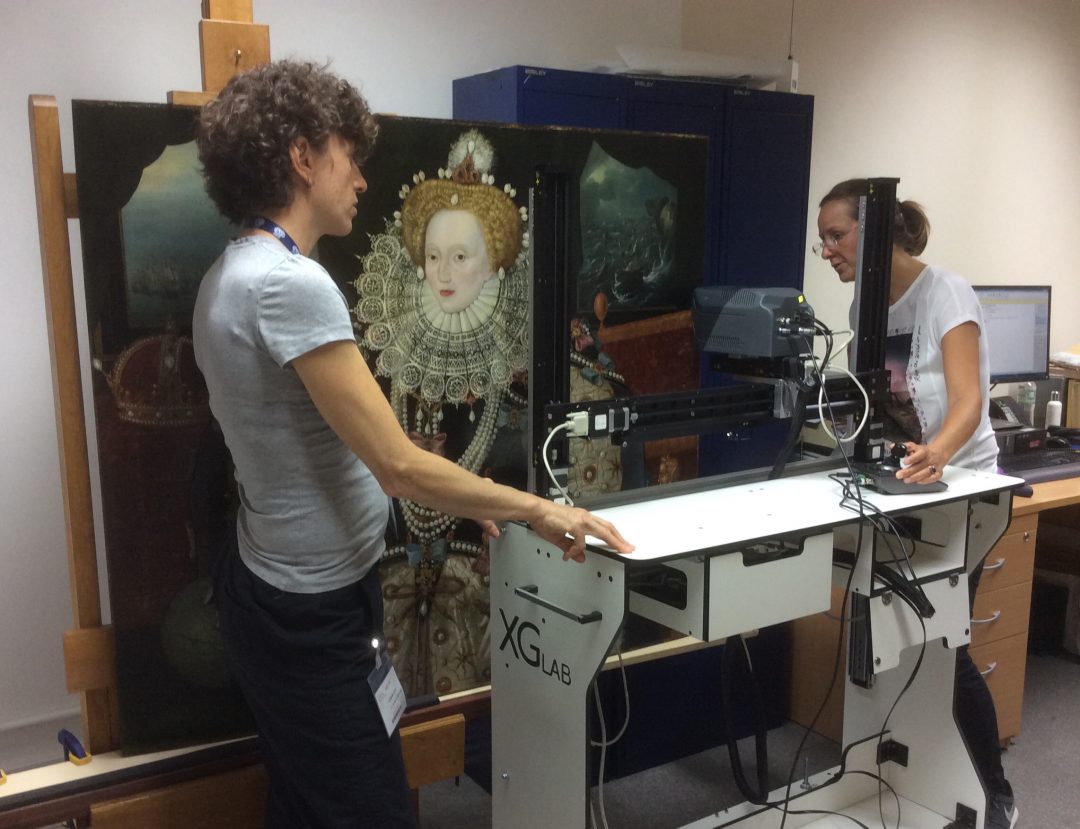 In October 2017, the Armada Portrait of Queen Elizabeth I went back on display in the Queen’s House (part of Royal Museums Greenwich) after extensive conservation and research into the two seascapes depicting the Armada action in the background. We particularly wanted to examine these areas in depth and we successfully applied for an EU award which facilitated Macro XRF examination by MOLAB, (IPERION CH – Integrated Project for the European Research Infrastructure ON Cultural Heritage). The painting is one of three known versions of the Armada portrait; the other two are owned by Woburn Abbey in Bedfordshire and National Portrait Gallery, London. All three are contemporary with each other, painted soon after the Armada in 1588. The artists are unknown. Our conservation research project had two strands:

1. Researching the two seascapes including the date they were added, pigment and materials analysis.

2. Revealing the original colours of the painting including consolidation of raised or insecure paint and retouching any damage and losses to the original paint.
a. The consolidation was required as the panel painting has been exposed to fluctuating humidity levels over the centuries which has caused weakness and loss in some areas of the paint layer.
b. The removal of the varnish was necessary as successive applications of varnish over the centuries were obscuring the original paint layers and colours as well as masking details in the painting.

The painting was X-rayed when it came to us on loan in 1987 for the Armada exhibition at the NMM. These X-rays indicated the original image under the seascapes, but the details were very difficult to make out. Being able to use Macro X-ray fluorescence scanning (Macro XRF) to examine the paintings were an ideal opportunity to get confirmation and develop a better understanding of the original imagery. The elemental distribution images acquired by this method allow for the visualization of hidden paint layers and thus provide insight into the painting, the technique of the artist and its conservation history. The X-ray scanner is mounted on a motorized stage in front of the painting and progresses across the area capturing the images. It is a very slow process and to examine/photograph these took a full week.

The analysis carried out as part of the MOLAB project also confirmed that the later seascapes were painted with Prussian blue, which was not in use before c.1710. This pigment was also found in the bows of the dress which makes the retouching to the costume contemporary with the seascapes. The blue and the general mixtures are consistent in all the samples, suggesting that the same hand did the background seascapes as well as the top layer of restoring the ribbon bows. The outcome of the project generated a huge media interest from many of the major British newspapers. The story was picked up in The Guardian, Daily Telegraph, The Times, Independent and a few others. Linked to the rehang is a series of lectures on the conservation project by Elizabeth Hamilton-Eddy: Meet the Experts talk, Members lecture, Greenwich Society Annual lecture, Art Fund presentation. A series of five video recordings have been documenting the project; all five films have been released on the RMG website and facebook. The conservation project of the Armada Portrait of Queen Elizabeth I will be presented at a forthcoming conference on Tudor Portraits at the Royal Museums Greenwich in 2018 and a paper is being prepared for submitting to a peer reviewed journal in 2018.

In summary – The XRF images proved especially valuable in indicating the secrets of the underlying layers of paint. They revealed the original painting, which appears identical to the Woburn Abbey painting. The images, because it can eliminate other details, shows the original earlier ships more clearly than anything we have ever been able to see. Without the support from MOLAB, (IPERION CH – Integrated Project for the European Research Infrastructure ON Cultural Heritage) we would never have been able to see so clearly the original imagery.