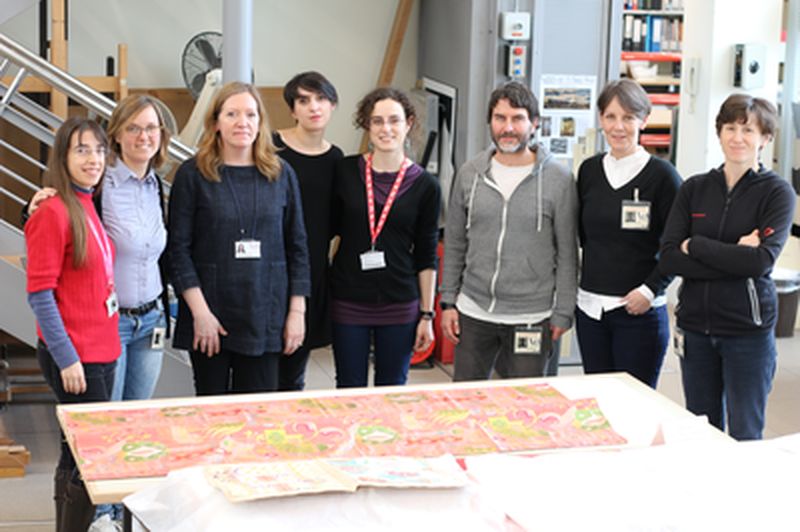 The Victoria and Albert Museum received the visit of three separate MOLAB groups (1A, 1B and 2) between February and June 2017, to work on the Leman Album.
The Leman Album, containing 106 designs for woven silk, was acquired by the V&A in 1991. Dating from 1706 to 1730, the designs constitute Europe’s earliest surviving set of this type of object. The album is in a very fragile state and currently cannot be moved outside the V&A, hence our request for a MOLAB intervention.The colours vary from being fresh and vibrant to dull, faded or altered. In many cases the colouring materials are eating into the page and causing losses. The V&A has also recently acquired a silk woven to one of Leman’s designs in the Album, one of only two such textiles known to survive. Access to MOLAB provided us with the means to focus on the analysis and identification of natural, organic colourants present on the designs and the fabric, and the results of the three analysis campaigns greatly enhanced our understanding of the materials used to make the Leman album; they also allowed us to track any pentimenti or changes of mind by James Leman between the creation of the original carbon sketch on paper and the application of the colours.
The MOLAB 1b Italy group used multispectral imaging to reveal what lies under the coloured surface of our Leman designs, i.e. the original underdrawings, and gave us an immediate visual confirmation of what areas were painted with the same pigment, dye or mixture. More crucially, information was also obtained on Leman’s own writing notes on the inaccessible reverse of some of the designs. Florentine scientist Marco Barucci liaised in real time with his colleagues in Italy, who performed digital enhancement of the multispectral images in order to make the writing more visible and at least partially legible.
One of the most immediate results of the MOLAB 1B visit was the instant recognition of the areas sketched with carbon-based materials and those where iron gall ink had been used.
The MOLAB 2 France group gave us access to hyperspectral imaging. Our three French visitors scanned the Leman designs and manipulated the results to highlight areas that contain the same material. Their analyses revealed that some elements of the designs had been added at a different stage (they look similar in colour and texture to the rest, but they are painted with a different material with its own specific reflectance spectrum).
The MOLAB 1A Italy group came with five different types of techniques. By using XRF imaging we were able to map the presence or absence of specific pigments, as well as outline the presence of other materials (such as a zinc-containing glue), and help to establish the reason behind some of the degradation processes. The quasi non-invasive use of SERS gave us invaluable information on the identity of many of the natural organic dyes present on the designs. None of these dyes could have been analysed or identified otherwise without proper sampling. The use of Fourier transform infrared spectroscopy, UV-Vis-NIR reflectance and Vis-NIR emission spectroscopy provided additional confirmation of the identity of the artists’ materials characterised earlier on at the V&A using V&A own equipment and added information on the identity of some of the organic dyes.
The three MOLAB analysis campaigns generated a wealth of data (many of which are still being interpreted and put into context), influencing the decisions we make for conserving and reconstructing the album. The identification of the organic dyes has already given us an idea of which designs are particularly light sensitive due to the presence of fugitive materials and is informing our display protocols for the designs. The detection of hazardous materials such as arsenic- and mercury-containing pigments is informing the policies we are devising around access to the Album.
Finally, all information obtained will be inserted into an enhanced facsimile of the Leman Album, which will be made widely available for free on our website. Partial results have already been disseminated through a series of V&A blogs, and more results are being compiled to be disseminated via publications and participation in conferences, the first of which will be in March 2018.