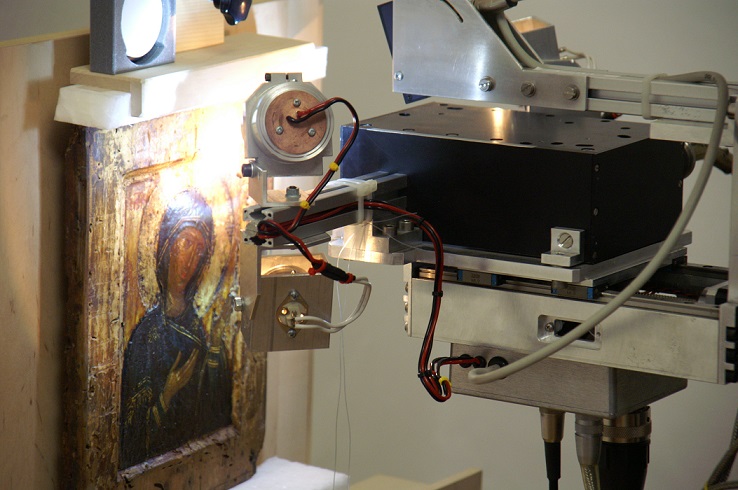 The so-called “Icon of Saint Luke” at the Diözesanmuseum Freising – a small Byzantine panel depicting Virgin Mary as “Hagiosoritissa” – ranks among the most precious religious art objects in Bavaria (Germany). According to tradition, the Byzantine Emperor Manuel II Palaeologus (1350-1425) took the icon with him on his journey to several European courts which had the aim to seek assistance against the Ottoman Empire. It was presented to the Cathedral of Freising by Bishop Nicodemus della Scala in 1440.
After a first art historical research and restoration around 1964, it became clear that the icon is a composite work and that its history is more complicated than the tradition suggests. X-radiography different. The MOLAB campaign carried out in March 2017 in Freising by three researcher groups from MOLAB Italy, France and Greece was part of a broad art-technological project initiated in 2015 by the Diözesanmuseum Freising in collaboration with the Technical University of Munich, the Doerner Institut of the Bavarian State Painting Collections and the Archäologische Staatssammlung Munich.
The MOLAB activity followed extensive microscopic and analytical studies of the painting and its richly-ornamented silver frame, now mainly focussing on the painting technique and condition of the central panel and its original appearance as well as current condition. Multispectral NIR reflectography (MOLAB 1- Italy) resulted in significantly improved visibility of a dark underdrawing of the first, older composition in the spectral range around 1900 nm compared to“conventional” broadband NIR  images recorded by Macro XRF scanning (Doerner Institut) revealed a clear picture of the underlying composition with numerous differences to the version visible today. Thz imaging (MOLAB 2 – France), which until now was only rarely used on paintings, was applied with the goal to differentiate non-destructively between the two paint phases. The technique proved to be able to distinguish the wooden carrier, the gesso ground and the paint layers in forms of virtual cross sections and horizontal 2D reconstructions of the two interfaces, however, the layer thickness of the two paint phases proved to be too small to be resolved sufficiently.
Finally, DHSPI (MOLAB 4 – Greece) helped significantly to better evaluate the current preservation condition of the icon. The interferometric method allowed to draw the conclusion that the painting is in generally good and stable, however, some small areas of dynamic deformation were detected in the paint layers of Madonna`s face. DHSPI documentation thus identified areas with possible risk of detachment, which should be monitored by the conservators with special attention.
To summarize, the complementary application of Multispectral NIR reflectography, Macro XRF scanning, Thz imaging and DHSPI provided significant new insights both into the painting`s history as well as in its current condition. The combination of the various images will allow a more precise art historical evaluation of the first composition, and possibly narrow down the date of creation of the “lost”, older depiction of the Madonna. We expect the results to add significantly to the rare art technological data currently available on Byzantine painted art works.