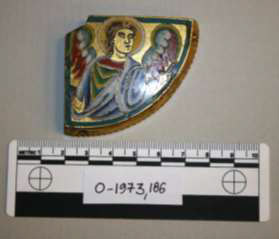 Romanesque champlevé enamels are an outstanding evidence of the fine art of the ancient goldsmiths, and one of the main examples of the prolific creativity of the Medieval period. The main centers of production were in Mosan, Rhenish, and Limoges regions. A number of studies have been produced on champlevé enamels from French and American, Belgian, and English collections. These studies allowed to obtain a wide set of information about how these productions evolved and about how they were interconnected and linked with previous manufacturers. Moreover, they allowed identifying technical features and materials of modern Limoges copies, which especially in what concerns the enamels, present common characteristics for both champlevé and painted enamels.
In 2009 the University of Torino, Chemistry Department started a wide non-invasive campaign aimed at characterizing Limoges metalworks in Italian collections. The research allowed the in situ analysis of about 110 Medieval originals Limoges enamel and about 40 copies dated to 19th century, mainly belonging to museum collections of Northern Italy, and one French collection.
The project aimed at integrating analytical data previously obtained by Rathgen Research Laboratory on a set of Medieval Champlevé enamels from the Kunstgewerbenmuseum, Berlin, within a more comprehensive discussion on Romanesque Medieval enamels. These enamels from the Kunstgewerbenmuseum are partly from the area around the Rhine or central to north Germany, but without a firm attribution to a specific production side. This analytical data was studied in order to compare it with previously studied objects from different production areas.
The Rathgen Research Laboratory (SPK) has μ-XRF and Raman analytical data on Medieval Champlevé enamels from the collection of the “Kunstgewerbemuseum, SPK”. The data is complex since the metadata, which is partly handwritten in a lab-journal is important to understand the meaning of the data. The format of the spectral data and the hyperspectral XRF-data cubes requires a specific software to access, manage and analyze the data. This can only be accomplished by consulting the data with the appropriate software in the Rathgen Research Laboratory.
Raman and μ-XRF data of the seven objects were discussed in detail with the ARCHLAB provider. The Raman data was treated and background subtraction was modified in order to improve the spectra interpretation. Provenance of the objects was discussed with the curator of the Kunstgewerbemuseum, Berlin.
The analytical data on Medieval Champlevé enamels from the collection of the “Kunstgewerbemuseum, SPK is now better understood in detail. This is facilitating the interpretation and the comparison of the compositions with respect of the provenance of the object. The analytical data obtained from the spectra analysis will be published together with the colleagues of the Rathgen Research Laboratory (SPK) within the period 2016/2017. A first article on one particular object will be published in the Journal of the Rathgen- Forschungslabor, the Berliner Beiträge zur Archäometrie, Kunsttechnologie und Konservierungswissenschaft, Volume 24/2016. We further aim to publish in a peer-reviewed journal to communicate the results, with particular attention to the enamels supposedly from Trier and results from the Raman spectroscopy analysis.

← Yellowish Gypsum Efflorescences on Wall Paintings from the 14th Century in the Cathedral of Schleswig in Northern Germany LUCAS ICON: The hidden Madonna – Multi-and hyperspectral imaging on the 14th c. Byzantine “Lucas Icon” from the Diözesanmuseum Freising (Bavaria, Germany) →
Keywords