PEMAN: Polychromy on Egyptian works of the National Archaeological Museum (Madrid, Spain). Technical study of the impact of VOCs 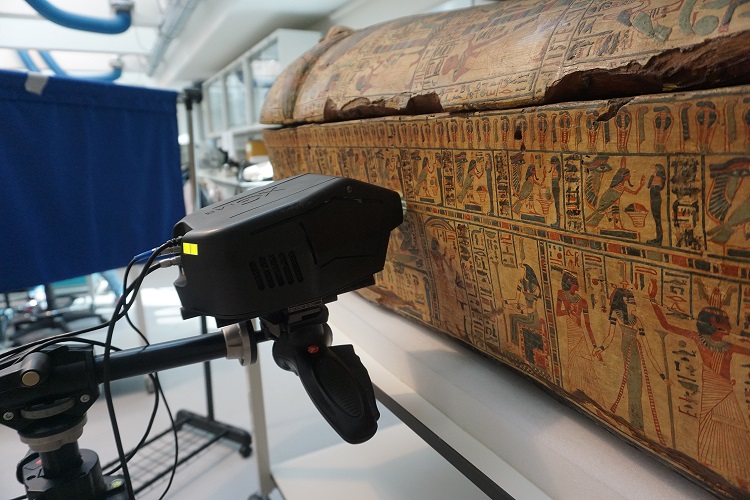 The objectives of project AIR ARTE include the determination and quantification of the VOCs considered as problematic, as well as their possible treatment with the most effective techniques of the three proposed: filtering via activated carbon, active polarization, and photocatalysis. In this way, at the end of the project and after a thorough technical and economic assessment, the coordinating company will be in a position to market the most efficient one.
How is the cause-effect relation between the VOC concentration and the component material of the exhibited work determined? Obviously, there are many materials, shapes, and colors that can be affected. With the current state of knowledge, for now, we focus on the materials of pieces that are of prime historical and artistic value. Since the MAN has significant works from Egyptian culture, the Egyptian Antiquities and Conservation departments decided to request, via the IPERION CH (Integrated Platform for the European Research Infrastructure ON Culture Heritage) platform, the mobile laboratory for non-invasive measurements (MOLAB) in order to study the polychromy  of the MAN collection and, in collaboration with the CIEMAT, assess the incidence of VOCs in the project called PEMAN (Polychromy on Egyptian Works of the National Archaeological Museum. Technical study of the impact of VOCs).
This Project has been approved, and last February MOLAB technicians from Italy and France worked with four selected pieces: two coffins, one mummy mask and a box of small figurines called ushabti that were included among grave goods, all of them polychrome. Three of these objects are made of wood and one of cartonnage (linen and plaster with an organic binder), and they offer a complete chromatic repertoire. All these works are displayed in the MAN’s permanent exhibition. The techniques used were: X-ray fluorescence, Mid-infrared reflectance, UV-Vis fluorescence, Vis-NIR reflectance and NIR hyperspectral imaging.
With the identification and characterization of these pigments, a causal relationship can be established between the concentration of the different contaminants and the losses, and even changes, of color that they can cause to these artworks. Siloxanes and aromatic hydrocarbons such as xylene, ethylbenzene, trimethylbenzene, and toluene are, among others, new contaminants for these works; they did not exist when the different pigments were conceived for coloring. What is the evolution they will experience due to the presence of these new contaminants? This is something that needs to be investigated. The alternative that photocatalysis or either of the other two studied techniques represents for reducing the existing ambient burden on the works in general and the most singular ones, in particular, must still be clarified.

← MacSTONE: Effects of fire on building stone at the Mackintosh School of Art, Glasgow, Scotland TIMOR: Terahertz Imaging of a Concealed Wall Painting at the Church of St Gregory the Great, Morville, Shropshire, UK →
Keywords