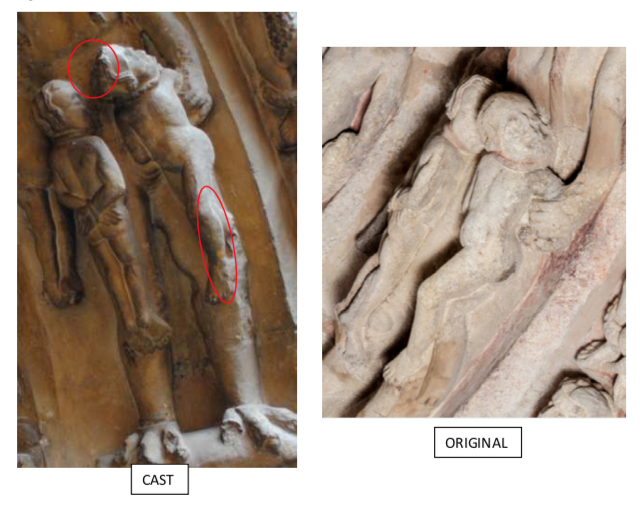 Scope of the project

This project focuses on the study of the plaster cast of the Portico de la Gloria on display at the Victoria and Albert Museum (V&A) and its unique relationship with the original object in Santiago Cathedral. The research aims to unveil the intrinsic relationship between the copy and original, by learning more about the original moulding and casting technique, to help understand the technology involved and the implications for both works in terms of their long-term conservation and their historical and artistic values.

This is a significant moment in the history of the two objects: two teams of conservators from different institutions, V&A an IPCE, are working simultaneously on the copy and on the original. The information and discoveries that both teams are gathering have important relevance for each other’s project. By gaining access to the results obtained so far by the IPCE we can gather vital information which will inform the conservation of these significant works of art and the rediscovery and preservation of their historical, artistic and intangible values.

The V&A is one of the world’s leading Museums of Art and Design, its collection extends from early medieval period to the 20th century, including thousands of precious objects of different materials and sizes, exploring different craft traditions around the world. The birth of its collection dates to 1851 with the first International exhibition that took place in London. Since its establishments the V&A’s mission has been to showcase the best examples of art and design from around the world. Its objective was to inspire, educate and actively teach designers, craftsmen, manufacturers and the public. Its aim was and still is to showcase the principles of good design at a time of great development of all manufacturing industries, also a time when the traditional craftsmanship and its skills were in danger of disappearing.

During the 1860’s the V&A, then South Kensington Museum, started an ambitious campaign of collecting from around the world. One of the first V&A curators John Charles Robinson actively travelled around Europe, including Spain and Portugal, looking for objects to acquire. Robinson was responsible for identifying key sculptural and architectural works of art worthy of reproduction, or acquiring copies if already available. His efforts would be the beginning of what today is known as the Cast Courts, two large galleries at the V&A exclusively dedicated to those reproductions of works from all over Europe and where the copy of the Portico is today.

On his trips Robinson followed the travelling guides of the day, exploring remote areas such as Galicia in Northwest Spain. On one such trip he reached Santiago de Compostela and its Cathedral, where he saw the famous 12th century Romanesque Portico, the Portico de la Gloria. Robinson was amazed by the quality of the work, comparing it to The Sistine Chapel. He was determined that the museum should have a copy of this architectural work as a master work and unique example of Romanesque European art. In 1865 an Italian moulder based in London, Domenico Brucciani, was commissioned by the V&A to reproduce the work, travelling with his team to Santiago to make a cast that he would later install at the V&A, where it has been on display for the last 150 years.

The early intervention by the Museum lead to the production of the first known photographic records taken in Santiago of the Portico de la Gloria and its Cathedral, becoming invaluable records of the condition of this work in the late 1860s. The display of the cast in London appeared in numerous publications of Victorian England giving the Portico and its Cathedral a renewed International prominence. This prominence would carry on for 150 years in many ways to be studied yet.

During the planning stages for the conservation of both works by the two different teams (V&A and IPCE) an initial contact was established to gather and share information. Both teams have made many discoveries during their work in situ on both architectural works, learning about their materials, construction, conservation condition and deterioration patterns, some of which are linked to the mould and the copy taken by the V&A. The IPCE have carried out numerous scientific analysis on numerous samples. The results of which are revealing information about the making, history and conservation of the objects. Also, historical documentation that has recently been discovered by both institutions is giving a more complete understanding of the objects, their common history and their international projection.

All this information is vital to understand the current condition of both objects and their historical interfacing. Despite regular communication between the teams, a detailed collaboration has not been possible due to the geographical distance, as well as lack of time and resources.

I am hoping this application will give me the opportunity to be able to benefit from all the work the IPCE team has gathered so far and study all these contents methodologically for a greater result of both interventions.

← COTECH-Copying the master or mastering the copy? Reconsidering copying practices as a pictorial strategy for artistic renewal and art theory in the 16th-C Low Countries Iberian Peninsula Influences in Painting from the 15th and 16th centuries →