VSWP: Whitewashed wall paintings found in the reading room of the historicallibrary in Casino Nobile of Villa Sciarra – Wurts, Rome, headquarter of the Italian Institute of German Studies 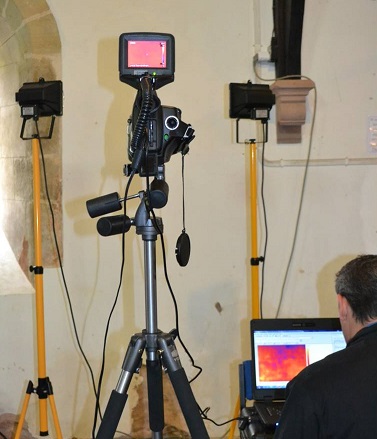 Villa Sciarra has had a twisted and unique history. As a result of the fusion of two different estates, it is the most perfect example of territorial development in the area of ​​Porta San Pancrazio. The first owner was clergy and registered in the year 1549. Several owners followed, until the birth of Casino Malvasia in the seventeenth century. The pastor Innocenzo Malvasia decided to expand the estate by adding a “Palatium”, a quadrangular building, with two overlapping lodges complete with fountains and gardens. After the death of Malvasia, Rivaldi became the owner of the Villa. It was only in 1653 that Antonio Barberini purchased the Villa, and in 1654 the Barberini received the Villa Mignanelli-Vaini as a gift, which joined Villa Malvasia, creating the large villa now Sciarra, the park, with vineyards, orchards and flowers, ended with the new loggia added to the Casino Nobile. The vaults of the loggia, nowadays are covered with white plaster and the columns present a tempera decoration with grotesques of the early twentieth century, commissioned by the Wurts. Recent examination on the vaults brought to light fragments of frescoes with grotesques and architectural compositions. The fragments probably suggest that Cardinal Barberini, together with Sacchi, his trusted artist, has completed the renovation of the Casino with a previously unpublished pictorial cycle, dating back to the seventh decade of the seventeenth century: in fact the cardinal assumed the famous artist Andrea Sacchi, painter and architect among the protagonists of the Roman Baroque, entrusting him with the renovation of the Villa, both in terms of architecture and landscape. Sacchi was responsible for a team of painter and sculptor artists, builders, surveyors and artisans. It is reasonable to think that the hidden mural paintings were executed around that time. These paintings are on the vaults in the reading room of the library, which at the time was probably an open loggia leading to the Secret Garden designed by Sacchi himself.

The investigations envisaged with Molab access included the use of the Terahertz, NMR, thermography and DHSPI techniques to investigate the presence of hidden murals and to provide information regarding the state of conservation by highlighting cracks and detachments. Terahertz radiation, particularly suitable for the detection of hidden wall paintings could penetrate through the layers of plaster and lime to provide sufficient contrast to produce images of underlying paintings. Furthermore, the use of the NMR depth profile provided information on the pictorial stratigraphy that characterizes the thickness of the layers that cover the original decorations. The combination of simulated infrared thermography with DHSPI was exploited for the state of conservation of the painting and to highlight gaps and missing parts of the hidden decorations.

The NMR profiling measurements, in particular were performed at different vault positions in order to characterize the thickness and morphologies of the layers.  The plaster was found to be roughly one millimeter thick at all locations and turned out to absorb nearly all available water as observed by comparing wet and dry spots. As no water appeared to penetrate the underlying layers, NMR contrast was based only on inherent proton density caused by water or organic material in each layer. In the spots investigated, it was observed that over the first 6 mm there is an almost constant level of organic material present. Assuming that this is solely due to a previous conservation treatment possibly casein as suggested by the conservators, or a similar coating, the substance appears to have spread out homogeneously over all measured layers. In parallel by thermography and DHSPI, the presence of cracks have been found in many areas of the surface. Most of which do not cause any disturbance to the rest of the fringe system, neither show other fringes inside the crack. The cracks found on the coated with plaster areas: was not expected, given the cohesion and density of the material and many of the cracks are uniform continuity of cracks found in the regions of fresco.

This work has served to identify any risks for conservation purposes, and to investigate the hypothesis according to which original fresco exist under the layer covered with plaster. All analyses will permit a restoration intervention protocol to be established for the recovery and enhancement of the object in question.

← REBRE – The Renaissance Bronzes Revisited PICASSO’S ACROBAT FAMILY IN FOCUS: a further investigation of materials and techniques of an iconic work in the collection of the Gothenburg museum of art →