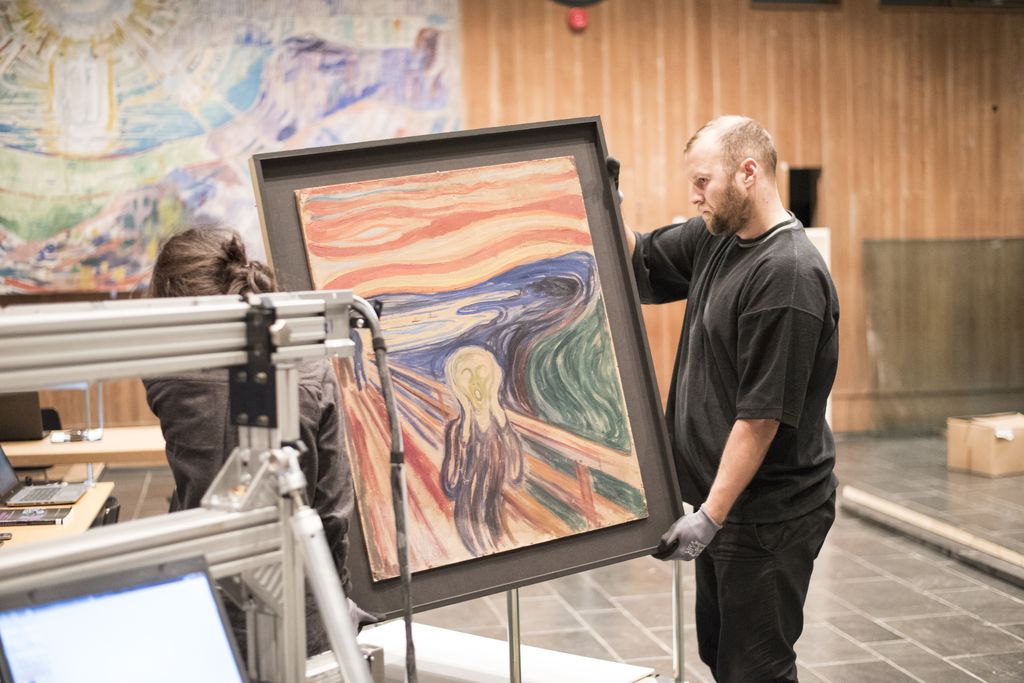 The MOLAB Access granted through the Iperion-CH platform for the project TECH_SCREAM_TECH – TECHnical Study of CoRE Art Materials & TECHniques of SCREAM versions (TECH_SCREAM_TECH) was performed in two different weeks: between 2nd and 6th of October and between 12th and 15th of December 2017.
The SCREAM motif is iconic for modern art as a symbol of artistic expression of despair and anxiety of humankind. Edvard Munch made variations of this motif in different techniques; four of which were painted/drawn on cardboard: two at the Munch Museum, one in the National Museum of Art in Oslo and the fourth in a private collection in the United States. The Munch Museum also possesses six lithographs (including a hand-coloured one) and three sketches on paper.
The TECH_SCREAM_TECH proposal focused on the multi-analytical investigation of the materials and techniques of six versions of the “Scream” motif (among the 11 ones, owned by the Munch Museum in Oslo, Norway). These six works cover different colouring techniques: MM.M.00514 – painted version and MM.M.00122b – pastel and/or crayon (?); the sketches MM.T.00255 and MM.T.02301; the prints: MM.G.00193-1 and MM.G.00193-3.
The main aims of this innovative and completely non-invasive study were to gain further information on the materials present in the 6 art objects (from supports made of cardboard and paper to the colouring materials, such as pigments, fillers and also binding media), to understand the way Munch created his artworks and how he applied the paint, drawing and printing layers and to have more insights into the ongoing degradation processes (e.g. fading cadmium yellow in version MM.M.00514).

The Access involved the use of 7 portable instruments from CNR in Florence (INO) and Perugia (ISTM) during the October week, operated by 8 scientists and 2 instruments operated by 4 scientists from different research institutions in France (C2RMF/CNRS, CRC/CRCC and Sorbonne Universités, Centre de Recherche sur la conservation) during the December week. From the Munch Museum, several paintings and paper conservators and technicians were also involved in the organizational tasks of the Access. These two analytical campaigns were completely non-invasive, making use of imaging techniques based on scanning of the surface of each artwork with different radiations (e.g. macro-XRF,
hyperspectral mapping and acquisition) and punctual techniques (XRD, Raman, FTIR, and XRF spectroscopies), where the analysis was performed on spots on the surface of the objects. In the second week of access, the XRD instrument also operated for one day on the “Scream” from National Gallery in Oslo, to allow a comparative study with the version at Munch Museum.
During the Access in October parallel actions of dissemination to the public were done in the form of a 3 days programme of Educational activities (3-5th of October) entitled “Scream under a magnifying glass (Skrik under Lupen)”, involving free of charge visits from the public, and workshops for students of secondary schools.
On 4th of October, instead of usual monthly meeting for the museum employees, a visit to the MOLAB facilities was done between 8.30 and 9.30.
On 6th of October, the Conservation Department also organized a half day Seminar with guests from the University and National Gallery in Oslo, where oral presentations were delivered by foreign specialists who worked on the main “Scream” versions from both museums. The seminar was also open to other departments in the museum; and after lunch, some of the participants to the seminar were invited for discussion on further publication of scientific works around the studied versions of the Scream.
The main aims of the project were met and that analytical data is currently in a phase of interpretation.
An abstract will be submitted to the conference CHEM CH to be held in July 2018 in Romania. It deals with the results of the comparative study between the painted “Scream” version at the National Museum in Oslo and the one from the collection of the Munch Museum. Furthermore, the analytical data which can be presented in image/false colours forms will be used as digital means of dissemination. An online database focused on important case-studies from the MUM’s collection will be developed and available to the general public in the future.

← Hidden Armadas in the Armada Portrait of Elizabeth I Recovering Giotto at the Basilica of Saint Anthony, Padua →