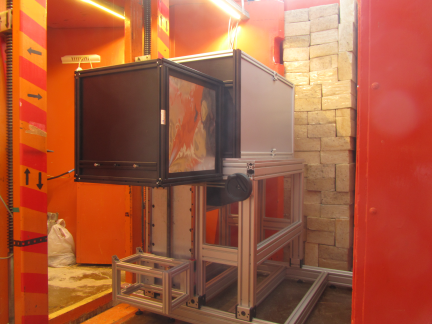 Until today, six pieces of cauldrons or fragments of it have been recovered in Hungary dated to the Hunnic period. The finds from Iža/Leányvár (Slovakia) investigated at BNC may be still added to this cultural region. There are only rather general indications about the alloys (e.g. bronze or copper cauldrons) and the casting techniques used. Generally reference is made to copper alloys, which were cast in two- or four-part moulds. A systematic archaeometric examination of the metal vessels at BNC using a consistent methodology (TOF-ND, PIXE, NI) enables the comparison of the data on a sound basis.
Successful thermal neutron imaging experiments of the ten fragments with a spatial resolution of 0.17 0.24 mm have been performed on the RAD imaging station. The imaging of the large fragment was accomplished by moving the object provided there is overlapping. The fragments were not cleaned before. The FIJI code was used for a later image processing to produce the so called attenuation images. Images are flat-field and dark current corrected, but beam hardening and scattering corrections were not applied. Neutron tomography was carried out for one of the objects. As an example, on the fragment HC 108/92, a layer was identified, which separates two parts of the object. Left to this layer there are more voids in the volume compared to that in volume right to the layer. The existence of this separating layer provides more information about the casting process. Unfortunately, such layers were not found in the other fragments. The neutron imaging, however, showed the different quality of the casting process as the number and size of the voids in the fragments differed significantly. These differences can help to group the objects and identify their origin and manufacturing.