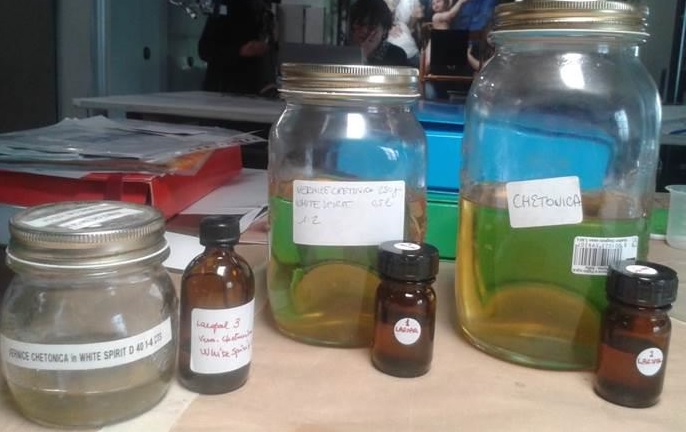 The research project running at the Conservation Department of the Munch Museum (MUM) in Oslo from December 2016 until end of 2018 aims to:

• map the extent of Munch paintings in the collection affected by AW2 varnish applied in earlier treatments,
• study the chemical and physical nature of AW2 resin and other ketone resins that were applied to the paintings (late 1950’s to the beginning of the 1980’s),
• understand the origin of the observed degradation-deterioration patterns and their effect on the underneath paint layer.

This knowledge will provide the base for establishing a suitable methodology for the removal of the degraded varnish if necessary.
From the internal survey performed on conservation reports the following data emerged:

The scarcity and incompleteness of information regarding additives, solvents, and descriptions of application in the treatment reports make it difficult to understand the exact usage of these synthetic resins. On some of the affected paintings, the AW2 varnish is degraded (yellowing, blanching, cracks, and cuppings), while in others it is in good condition.
It is likely that wax has been added to the AW2 resin (results ATR-FTIR, literature). Some of the observed visual disturbances might be caused by the added wax.
The ketone resins and in particular AW2 were proposed as varnish materials due to the need of new, more stable varnish materials (Cleaning Controversy England 1946-1963, seminar on resinous surface coatings in Oberlin Ohio 1959) and their optical and physic-chemical properties that made them desirable with respect to natural resins or other acrylic polymers (which convinced due to stability but felt short in optical properties).
Ketone resins have been used widely since the 1950’s due to good film building properties, good optical properties, its good handling properties and solubility in non-polar solvents (expected also after ageing). The main additives are: dammar, wax, bleached stand oil, castor oil, industrial plasticisers, can be applied by brush or spray and dissolve in solvents such as turpentine oil and white spirit.
The ageing behavior is not extensively studied, but it is known that mainly oxidation processes take place at carbonyl groups (Norrish I and II reaction), some double bonds, tertiary carbon atoms, hydrogen atoms in alpha-position to carbonyl groups. With increasing oxidation the polarity changes in polarity from non-polar to more polar – just as natural resins and the materials inherited brittleness causes micro cracks and possibly blanching. The information on yellowing in literature is contradictory.
Mock-ups are needed to achieve a better understanding of the behavior of the low viscous and low-molecular-weight resin on the painted surface. Of special interest is its penetration into the paint layers with different pigment volume concentration, and the influence this has on the results that can be achieved with analytical tools. Further, the mock-ups will serve to execute preliminary cleaning tests.

← YARNWINDER: Investigating the making of the Virgin of the Yarnwinder by Leonardo da Vinci Characterisation of excavated Napoleonic artefacts from the Berezina battlefield in Belarus using neutron PGAA →