YARNWINDER: Investigating the making of the Virgin of the Yarnwinder by Leonardo da Vinci 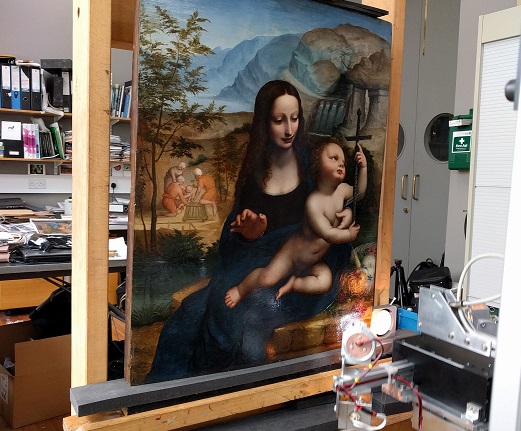 Looking at the genesis of the motif of Virgin of the Yarnwinder created by Leonardo da Vinci, the project aims at comparing the materials and techniques of various versions of the work.
The goal of looking at these versions is to understand one of the recurring and most replicated motifs of the late renaissance in term of workshop production, design processes, and painting techniques. The project wishes to contribute to the recent initiatives, which looked into Leonardo’s practices.
Also known as the Lansdowne Madonna, the rapid dissemination throughout Europe of several versions and copies of the masterpiece indicates the motif may have been replicated in Leonardo’s workshop during the elaboration of the work itself.
If this mode of reproduction is known within the circle of Leonardo’s assistants and followers for other of his major works, the Virgin of the Yarnwinder is unique in the compositional variations found in the copies. Each of these paintings relates to one another and to the autograph work in depicting elements initially planned out by the Master and later removed.
Versions of the motif can be classified in distinct formal categories as suggested by Martin Kemp and Thereza Wells. One of these groups involves a composition understood as Leonardo’s very first design.
Described by Fra Novellara in a letter to Isabella d’Este, this first composition is partially visible in the infrared reflectograph of the Lansdowne Madonna.
A striking example from this group is in the collection of the National Gallery of Scotland. In the Madonna of the Yarnwinder (Unknown artist, 62.00 x 48.80 cm, oil on panel, about 1520-1530, NG2270) the yarns described by Novell ara are part of the composition, yet those can only be seen in their sketched stage on the infrared reflectograph of the autograph work.
Since all the paintings from this group, including the aforementioned Madonna of the Yarnwinder, maintain very similar measurements, it is our understanding that they could be based on a unique cartoon. Traces of pouncing visible in the multi-NIR image of the Lansdowne Madonna indicate that a cartoon was indeed used.
The painting was examined in the National Galleries of Scotland using a multi-NIR scanner, the only existing equipment that can provide two essential features:

The data obtained allowed a comparison and superimposition of the IRR of the two paintings.