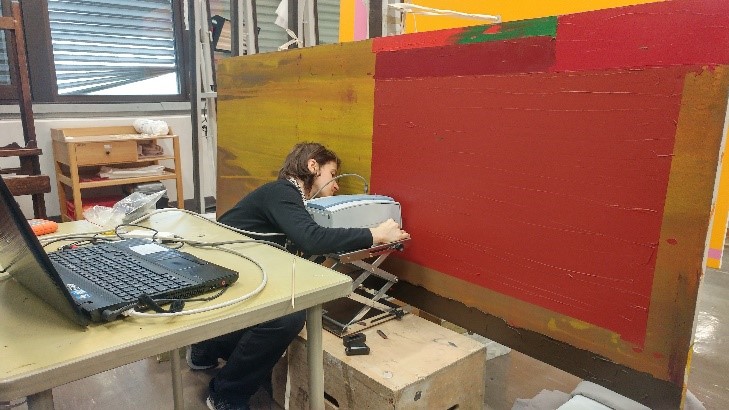 In order to inform ongoing investigations into the effects of wet cleaning treatments carried out on acrylic emulsion paintings, an application was made to MOLAB in 2019 for the use of mid-IR reflectance spectroscopy to assess the surfaces of 4 acrylic paintings dating from the 1960s and 1970s belonging to Tate’s collection. Three of the paintings; Alexander Liberman’s Andromeda,[1] 1962, (Tate, T00650); Jeremy Moon’s Untitled 2/72[2], 1972 (Tate, T02052) and John Hoyland’s25.4.69,[3] 1969 (Tate, T01129) had been aqueous wet cleaned as part of the Tate AXA Art Modern Paints Project[4] in 2007-8. A fourth painting, Hoyland’s11.7.64,[5] 1964 (Tate, T14174) was also examined in 2019 as an example of a significantearly acrylic painting, recently acquired into Tate’s collection.The aim of the 2019 visit was to (re)assess the surfaces of these paintings for the absence/presence of migrated surfactant on each of the works, largely characterised as the non ionic APEO (alkylphenoleyhoxylate) surfactants Triton X-305 and X-405.

In 2007, the MOLAB team visited Tate and assessed the surfaces of Liberman’s Andromeda and Hoyland25.4.69using portable mid-IR reflectance spectroscopy and AFM, prior to conservation treatment. This was the very first time the surfaces of acrylic paintings had been assessed for their surface character. On both of these paintings, surfactant was found to be present on thicker paint passages (e.g. palette knife applied areas) and on colours that did not contain cadmium pigments.[6],[7] During that visit, cleaning tests were also carried out on discrete areas with water and with a non-polar mineral spirit solvent, which showed that the use of swabbed deionised water removed all detectable surfactant, and that use of non-polar mineral spirits facilitated the retention of the bulk of the migrated surfactant, but did not offer effective soiling removal. The paintings were subsequently cleaned following a rigorous methodology using pH adjusted (using ammonium hydroxide) water between pH 6-7.5, with up to 2% v/v. added ethanol. It was assumed from the limited assessments carried out on the paintings in 2007 using ESI-MS and the MOLAB IR system, that any migrated surfactant present on these paintings would have been removed by the aqueous-based cleaning treatments. This was consideredan acceptable consequence of the removal of the significant accumulated soiling, scuffs and marks.

The 2019 application centred around revisiting these paintings more than 10 years later to assess whether surfactant was now detectable (or not) on any of the works; which would indicate that the surfactant remigration process (from the bulk paint film to the surface) had begun. Interestingly, no surfactant was detected on any of the three aqueous cleaned paintings, except for two tinyareas of Hoyland’s25.4.69 where surfactant had been retained within air bubble craters, which are often present in dried acrylic paints. The fourth painting, Hoyland’s11.7.64, which to the best of our knowledge[1] had not been wet-cleaned, also did not appear to have surfactants on the paint surfaces, which may be an artefact of Hoyland’s well-known use of large quantities of water during the making of his paintings.[2]At this stage we are still exploring the IR results and how these findings sit within the wider research into the effects of the ambient environment on the migration of surfactant in and out of acrylic paint films; which will form part of apaper destined for the ICOM-CC triennial meeting in Beijing, China, in 2020.[3]

← Investigating the making of the Virgin of the Yarnwinder by Leonardo da Vinci, Spain MeCaMi: Metals in the Castle: post-medieval Materials for the Objects of a noble Residence and for the military Equipments in Middelburg-in-Flanders (Belgium, 15th-17th c.) →