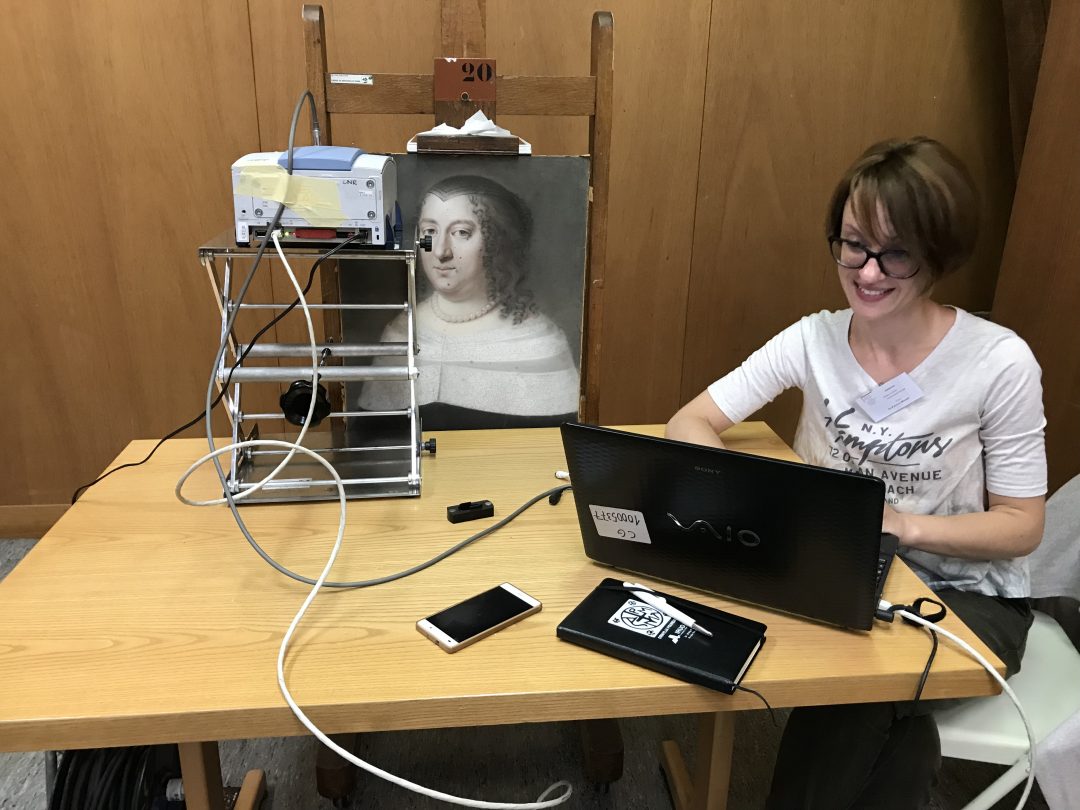 In 2015, the Department of Prints and Drawings of the Château de Versailles acquired 5 framed pastels by W.Vaillant (1623-1677). They consist of portraits of the French Royal family. In 1660, Vaillant was commissioned to paint Louis XIV (1638-1715), Marie-Thérèse d’Autriche (1638-1683), Anne d’Autriche (1601-1666), Marie-Anne d’Autriche (1635-1696) and Eléonore Gonzaga (1630-1686).
Vaillant is an engraver, draughtsman and pastellist. Specialized in mezzotint which he contributed to develop and invent together with Prince Rupert of the Rhine (1619-1682), he is also a draughtsman, an oil and a pastel painter. He contributed to promote pastel painting in France, together with Robert Nanteuil (1623-1678).
The five pastels are approximately 58,5x45cm, they are painted with graphite and pastel on blue paper. The paper is glued peripherally to acidic cardboard.
Because they are very fragile art works, they are framed behind glass and cannot be studied unless they are unframed. The conservation treatment offered the opportunity to study them.
The 17th century marks the evolution from a sketching technique to the development of pastel painting as an autonomous technique. Pastellists could make pastel sticks themselves or buy them from the end of the 17th century in Paris.
The purpose of the Molab venue was to study and identify materials because 17th century pastels have rarely been studied. This research project was also important for the pastels’ conservation. They indeed suffer from white lead sulfurization. Lead white blackening is rarely observed on pastel paintings.
From the 18th June to the 29th June 2018, the  Italian Molab  and Polish teams carried out a series of analyses at the Centre de Recherche et de Restauration des Musées de France (C2RMF), site of the Petite Ecurie in Versailles.
The five pastels were studied at the same time.

Multispectral VIS-NIR imaging enabled to identify underdrawing and damages related to mould or water damages.
Point analyses as XRF enabled to characterize mineral pigments.
UV-Vis-NIR reflectance/fluorescence were also used for pigment and dyes characterization (together with Raman). OCT enabled to characterize thickness and morphology of the paint layers.
The main achievement was the characterization of the media layer and its structure. Materials used at the time and specifically by Vaillant could be identified, and compared to contemporary recipes, treatises and other bibliographical references in several languages for interpretation. The characterization of materials enabled to relate to historical recipes from the same time period. The pigment analysis helped us characterize lead pigments. The analyses results enabled to relate to contemporary recipes of lead-containing pastels and white gouache.