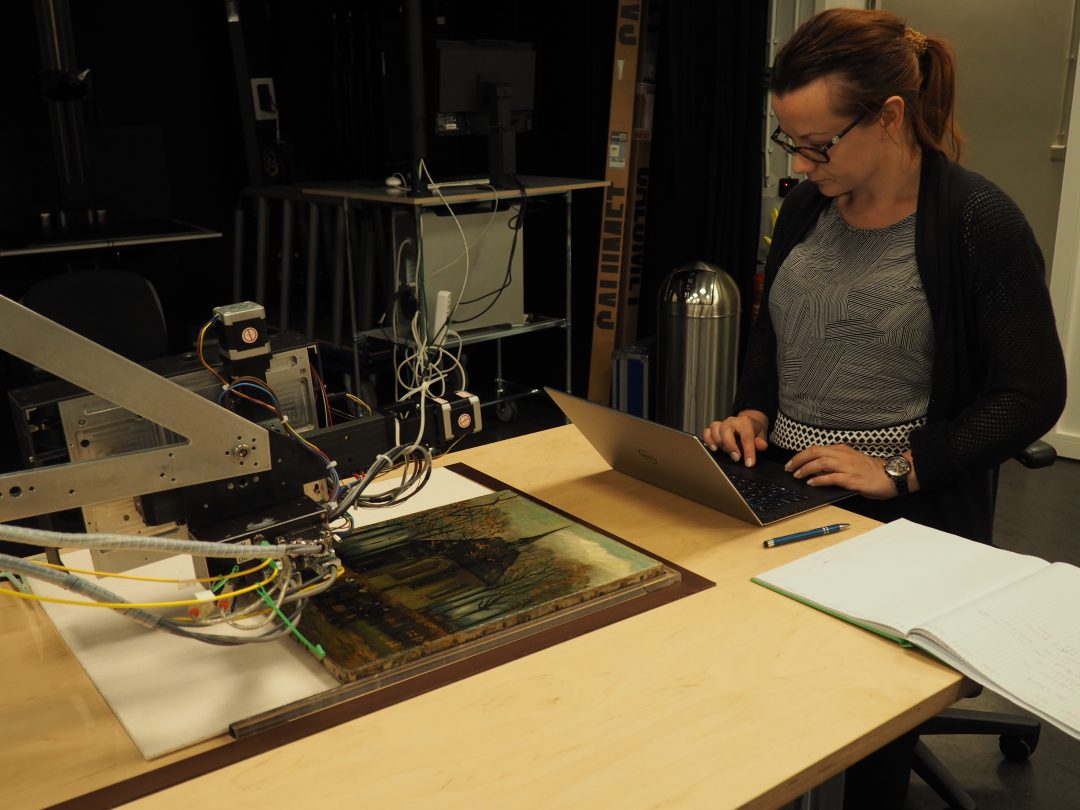 In September 2016 the two paintings Congregation Leaving the Reformed Church in Nuenen (1884/85) and View of the Sea at Scheveningen (1882) by Van Gogh were recovered by a specialist team of the Guardia di Finanza after an absence of almost 14 years, being stolen from the Van Gogh Museum in December 2002. Hidden between two walls and wrapped in cloth, the paintings were found during an investigation by the Italian Public Prosecutions Department

Congregation Leaving the Reformed Church in Nuenen returned to the Van Gogh Museum in an unexpected, rather stable physical condition. However, the museum decided to take the opportunity of the painting’s return, to treat the painting prior to re-integrating it in the permanent collection as an aged, glossy and yellowed varnish on the surface interfered with the colour scheme as it was originally intended by Van Gogh.

View of the Sea at Scheveningen had suffered from a rather severe damage. In the lower left corner an area of the paint and the original paper support was missing (approximately 7 x 2 cm), revealing the underlying lining canvas. Prior to dealing with the damage in the lower left corner, it was decided to review the overall aesthetic appearance of the painting. An early patina a well as overpaints and later varnish layers created an image that did no longer match the original intention Van Gogh had in mind when creating this seascape. Especially the presence of the patina raised questions about its originality, as such a ‘layer’ or material has so far not been detected on other works by Van Gogh.

Congregation Leaving the Reformed Church in Nuenen shows a rather complex layer build-up as Van Gogh has worked on this painting on two occasions: he painted the initial composition in 1884, but reworked and changed part of it in late 1885. Previous examination had indicated the presence of multiple varnish layers, one of them possibly being applied by Van Gogh himself, as well as a number of unknown phenomena disrupting the original paint surface. In order to find out more about the number of varnish layers, their location in relation to the two painting campaigns, the type of varnish material used, the feasibility of removing any non-original varnish layers, and the origin of the surface phenomena, the painting’s surface was scanned by OCT and analysed with total reflection mid-FTIR.
The presence of an original egg white varnish in between the two painting campaigns could be verified, and thus most of the phenomena on the paint surface be linked to the ageing and degradation of this material. On top of the second painting campaign a synthetic alkyd resin varnish was detected, probably applied in 1961 during a restoration treatment. Tests to remove this yellowed and glossy varnish were monitored with both OCT and FTIR to establish whether any material from the (partly disrupted) original paint layers was affected, dissolved or removed during this action using organic solvents. In addition, the swabs used in these tests were extracted and analysed by micro-FTIR.

View of the Sea at Scheveningen

View of the Sea at Scheveningen was examined by OCT in order to establish the location of the dark brown/black patina within the structure of the painting that was discovered during previous microscopic examination. The patina is present in the entire painting, but only in the depths of the brushstrokes. Microscopic examination, supported with two paint cross-sections indicated that the patina consists of paint which lies directly on top of the original paint. The patina is applied when the original paint was fully dried, but early in the paintings’ history as it resembles the crack pattern of the original paint. The patina reacts sensitive to some organic solvents and mechanical action and has been abraded by previous cleaning treatments. As it varies in its appearance (from transparent brown to an opaque deep black), in some areas the patina is difficult to distinguish from old varnish residues.
In areas where the patina was thin enough to transmit IR radiation, most surprisingly underneath the patina a thin transparent material was discovered of up to ca 30 µm thickness. The origin of this material remains uncertain. Although the material could correspond to remnants of an early varnish layer that was removed from the paint surface elsewhere, based on microscopic examination of the surface it is suggested that the transparent material possibly relates to oil that is separated from the paint during the paint application. This oil separation, as can been observed in several areas of the painting, is the result of oil that is leached out of the paint tube and thereafter not properly mixed on the palette before application.
OCT was also used to examine the remnants of a signature in the right lower corner, providing evidence that these remnants are positioned either on top of the patina, or in areas where the patina is absent, on a transparent layer, most likely a non-original varnish. These results, combined with microscopic examination of the surface support the idea that the signature is not original as it is our understanding that initially the painting was not varnished. This is in line with other early works of Van Gogh where original signatures are rare.

The non-invasive analysis of both paintings’ surfaces and their materials as carried out during this study by MOLAB has provided a better understanding of their structure and condition. With this additional knowledge, the Van Gogh Museum conservators were able to tailor the proposed treatments so that both paintings could be restored before their return to the museum’s gallery for the first time in almost 17 years.

← Study and analysis of a series of pastels by Wallerand Vaillant (1623-1677) The mural painting Passion and Crucifixion by Bernardino Luini in the Church of Santa Maria degli Angeli in Lugano, Switzerland: technical and conservative study →