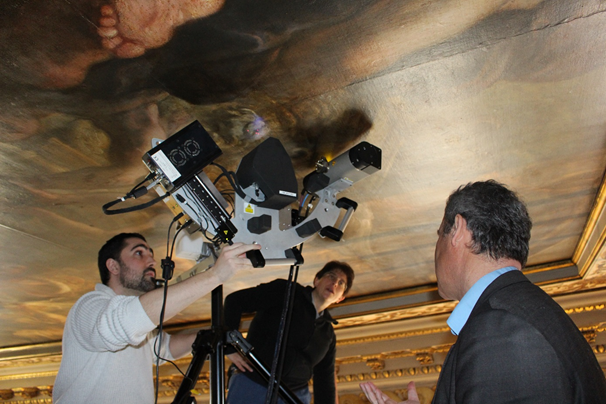 The nine ceiling paintings painted by Peter Paul Rubens and his studio were installed at the Whitehall Banqueting House in 1636. This set of painting is one of the largest (243 m²) and most complex works by the master surviving in-situ for almost 400 years. Since their creation, the paintings have been removed at least five times and treated about nine times. These interventions included removing the canvases from their original stretchers and marouflaging them onto plywood boards at the beginning of the 20th c., cutting, removal, and evacuation of the panels during World War II a major restoration campaign after the war and two subsequent treatments. Historic Royal Palaces’ current Banqueting House Whitehall conservation and re-presentation project provided a rare opportunity to carry out a first-ever full and systematic technical conservation survey of the Rubens ceiling paintings. The purpose of this scientific long-term research project is twofold:

During the first phase of this project, the nine paintings were documented in high resolution multispectral (visible, ultraviolet and infrared light ) imaging. This data combined with material from initial analytical results, previous conditions reports, and historic records informed the planning of a comprehensive technical analytical campaign, which took place between March and April 2018 facilitated by scaffold access as the paintings are almost 17 meters above the floor.

During this period eleven scientists from four different Molab teams (French, Polish, Greek and Italian) worked at the Banqueting House for one week each using six non-invasive portable instruments. Due to time restrictions, the non-invasive analyses were performed on two of the paintings, The Apotheosis of King James I and The Wise Rule of King James I.Despite challenges such as transporting this specialist and heavy instrumentation onto the scaffold and health and safety measures, the analysis and examination of the paintings were successful. Table 1 ( see the printable version) summarises details of the analytical methods used by the Molab teams and the technical information collected. The extensive non-invasive examination performed by the Molab was complemented by micro-invasive analysis.

Analysis and interpretation of these large datasets in collaboration with the Molab scientists are still in progress however, preliminary results are being summarized below.

The analysis confirmed the presence of materials commonly used by Rubens and his studio, such as lead white, lead-tin yellow, malachite, azurite, or brown and red-brown earth. Vermillion was also used extensively across all paintings, not only on red areas but also in flesh tones or pink and purple areas. OCT analysis demonstrated the use of lakes on the paintings and the condition of areas with impasto. The analytical results indicated also extensive use of smalt on blue, green or purple areas showing discoloration. In addition to smalt degradation, other alterations due to aging include fading of the organic dyes that now appear transparent, discoloration of pigments and formation of crusts. FTIR analysis results confirmed the presence of degradation products such as lead sulfates and oxalates.

Important information was also revealed regarding the varnish layers. Previous documentation indicated that the two paintings had different varnishes however, FTIR confirmed that Ketone N was used across both of them. Furthermore, OCT analysis results showed that in most of the analysis points at least three varnish layers with variable thickness were present on the surface of Wise Rule while, on Apotheosis, mostly two layers were present due to the previous cleaning. The OCT images also showed delaminations between varnish layers, or paint and varnish layers, causing a blanching effect.

Significant new insights on the structural plywood support were provided through careful study of the STIR images. Furthermore, DHSPI supported the evaluation of possible delaminations between the painting canvas and the substrate layer as well as understanding the formation of cracks over the plywood panel joints.

This project is expected to contribute new information to the study of Rubens and his studio practice. The findings will help uncover details for the production of these magnificent paintings and provide scientific evidence on the current condition and stability of the paint layers and the coatings which is paramount to the planning of any future conservation campaign. It is anticipated that the outcomes of this research will be widely communicated through conference presentations, academic peer-reviewed papers, online platforms, and the press.