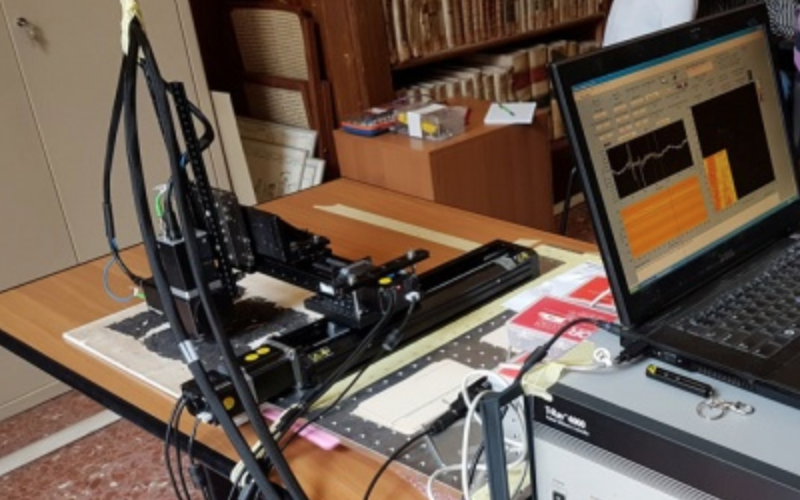 PHerc. 1691/1021, belonging to the papyrus collection from Herculaneum, is an opistographic roll. Twelve text columns (cols. Z-M), which belong to the same text as that written on the recto and that are indirectly known to us through 18th-century apographs, were added on the back of the roll by either the scribe or a corrector. Currently, the unrolled fragments are sticked to kraft paper and this does not allow to read the text written on the back anymore. The challenge is to read the latter through non-invasive techniques without removing the extremely fragile papyrus fragments from their kraft paper, what would result in their irreparable destruction. The application of advanced non-invasive techniques is the only way at our disposition today for recovering the precious textual portions written on the verso.

TeraHertz imaging is a recently demonstrated tool for content extraction and contrast enhancement through layered structures such us medieval manuscripts or multilayered papyrus fragments, with a high penetration capacity. A French TeraHertz MOLAB lead by D. Giovannacci was made available by IPERION CH and installed on May 2018 in the premises of the Officina dei Papiri Ercolanesi of the ‘Vittorio Emanuele III’ National Library of Naples. Conventional multispectral imaging has historically produced excellent results on several kinds of papyri and, especially, Herculaneum papyri, but is not able to penetrate into papyrus layer(s). On the contrary, NIR Hyperspectral imaging is partially able to do so. Another French MOLAB specialized in this technique and lead by Ch. Andraud was made available by IPERION CH and installed on February 2018 in the Officina dei Papiri Ercolanesi. To our knowledge, this was the very first time that these techniques were tested on Herculaneum papyri.

NIR Hyperspectral imaging. All fragments fromPHerc. 1691/1021(nine large papyrus fragments) were imaged and analyzed through different filters with excellent results in terms of contrast and text legibility. This crucially impacted on the text reconstruction, by producing a textual improvement of about 10%more than was previously possible through conventional multispectral imaging. Moreover and most importantly, some portions of the Greek text lying on the verso and previously known to us only through the witness of the Oxonian apographs were revealed again more than 200 years after their first discovery. The textual comparison with the Oxonian apographs allowed to establish their exact position with respect to the recto. The recovery of the text lying on the verso is finalized to the new critical edition of this book currently being prepared by K. Fleischer in the framework of the European ProjectREA Marie Skłodowska-Curie IF 703798-AcadHist supervised by G. Ranocchia. A specialized article discussing these groundbreaking results is now being prepared for publication in a physical review.
TeraHertz imaging: five substantial papyrus fragments belonging to PHerc. 1691/1021 were imaged. The resulting data set is currently still being analyzed by the team.